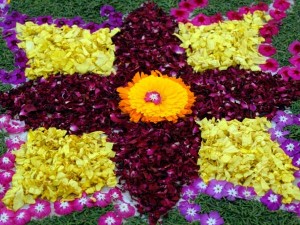 Bengali Weddings – lyrical and graceful. Like most Hindu weddings in India, Bengali weddings are family occasions, days to get together and have some great food and celebrate the bonding of the two families. There are elaborate rituals, but they are presented simply, the emphasis being on the traditional aspects of the ceremonies rather than on the glitz and the glamour, unlike the Punjabi weddings and Rajasthani weddings. Colours are muted, there is an abundance of flowers and rangoli, and everywhere at the wedding venue you can see visual evidence of their inherent artistic sensibilities. The sounds of the women ululating and of the conch shells, of Rabindra Sangeet and melodic folk music, all these are an intrinsic part of a beautiful Bengali wedding.

Customs and Rituals of Bengali Weddings:

The Aasirbaad, when the elders of the family visit the Bengali bride and the groom to bless them and offer them gifts, is the first of the pre-wedding festivities. The Holud Kota, or the ceremonial bath for the Bengali bride is conducted a day before the wedding, by five married women of her family. On the day of the Bengali wedding she is given the traditional white and red bangles, which she will now wear for the rest of her married life, by the elder married women of her family. The wedding procession of the Bengali groom is greeted at the bride’s mother with an earthen lamp and husked rice. After he reaches the wedding pandal, he awaits his bride, who is carried in by her brothers and uncles. She is taken around him seven times, while she keeps her face covered with a betel leaf.

After an exchange of garlands – similar to the Punjabi Jaimala they are permitted to look at each other during the Subho Drishti ritual. An elder male member of the family binds their hands together with the a sacred thread. The seven steps around the fire and the placing of sindoor in her hair is similar to most other Hindu Weddings and this concludes Bengali wedding.