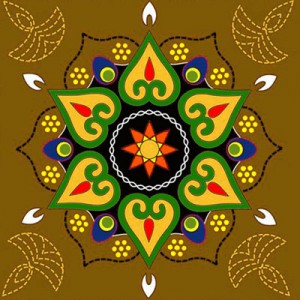 Parsi Weddings are beautiful in their simplicity. Amalgamating some of the Indian traditions within their own wedding rituals, the Parsis have one of the most unique wedding ceremonies in India. They are an integral part of this beautiful country, and over the centuries they have retained their identity, even while they have become an important component of the multi-hued Indian society.

Rituals and Ceremonies of Parsi Weddings:

The Parsi bride and the groom’s family plant a mango tree in a pot four days before the wedding. This is known as the Madhavsaro ceremony. The plant is carefully nurtured till the day of the wedding and is then planted elsewhere. During the Adarni ritual, three days before the Parsi wedding, gifts are exchanged between the Parsi bride and the groom’s family, when they go to each other’s home. Parsis are among the rare Indian communities where gifts are also given to the bride’s family. On the penultimate day, the wedding venue is decorated with chalk and rangoli patterns, as part of the traditional decorations. The bride and the Parsi groom are symbolically bathed by the family priest or Dastur, as part of the Nahan ritual. They both dress in white for the wedding, he wears a Dagli and Feta, she wears the Madhavate Saree. At the wedding venue they are greeted by their respective mother in laws during the Achumichu ceremony. They are then seated facing each other, with a cloth between them. Symbolically binding them with a string circling around them seven times, the Dasturji conducts the wedding ceremony. He later seats them side by side, lights the lamp and chants the traditional wedding prayers. At the conclusion of the wedding, rings are exchanged between the bride and the groom.

Most Parsi weddings are held at the Agiary or the Parsi Fire Temple. White is considered to be an auspicious colour and most guests are also dressed in white. A sit down dinner with a traditional Parsi multi-course dinner is served after the wedding.