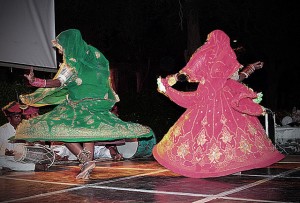 Rajasthani Weddings are Graceful and Ritualistic. Rajasthan is among the most beautiful states in India and it’s weddings reflect the beauty of this wonderful state. The Rajasthani weddings are elaborate occasions, and the entire neighbourhood is a part of the rituals and feasts.

Rituals and Ceremonies of Rajasthani weddings:

The engagement ceremony is generally an all-male affair, where the Rajasthani groom is visited by the male members of the bride’s family. The tilak is applied and he is showered with gifts such as money and clothes. Mehfils are held at both the homes, where the traditional folk songs are played and sung, and the women perform the graceful Rajasthani folk dance known as the ‘ghoomar’. The day before the wedding the Rajasthani bride is presented with clothes and jewellery during the “Palla Dastoor” ceremony. She wears these clothes on her wedding day. Earlier only men went for the actual wedding ceremony, but now women, in their colourful lehengas are an integral part of the wedding.  The groom comes on a horse, dressed in a traditional sherwani and with a sword. After being greeted at the doorstep by his mother-in-law with the traditional tilak, he is escorted to the mandap, or the wedding venue. The actual ceremony resembles the Punjabi wedding with the placement of the sindoor in her hair, the saat-pheras – or the seven steps around the fire, and the recital of the shlokas by the pundit or the priest. They are solemn affairs, and are very traditional and ritualistic in their processes.

The emphasis on the participation by the men is one of the unique aspects of a Rajasthani wedding. There are many rituals where the women do not form a part of the system, and most women cover their face when they are present in a gathering including men. The vibrant colours and the graceful dances are all a part of this amazing state.